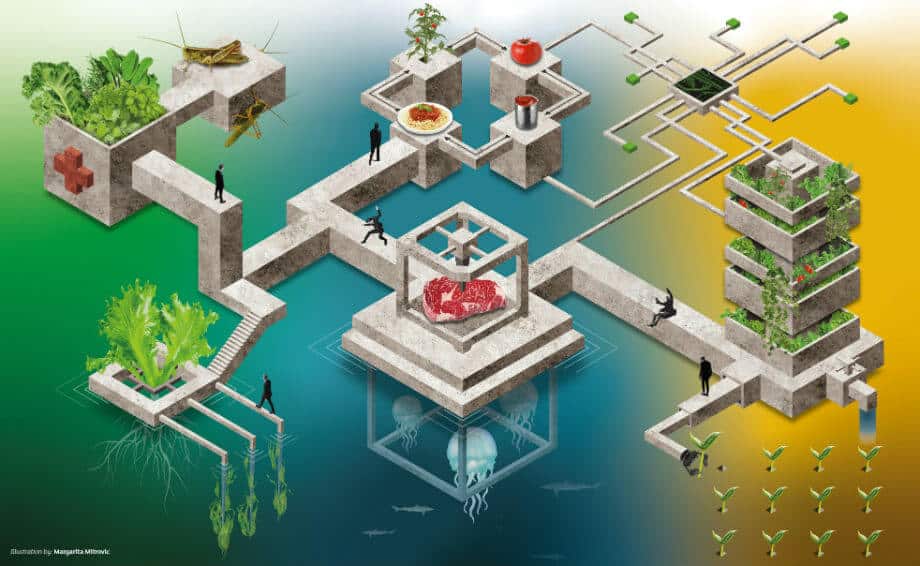 UK Supermarket giant Sainsbury’s has released a study about the future of food to commemorate its 150th birthday. The 34 page report makes predictions about the next 150 years of food, including algae milk lattes and cellular meat as a “genuine market competitor to farmed meat.”

The Future of Food Report discusses what consumer habits, “driven by unprecedented awareness of animal welfare, health concerns and eco-anxiety,” will look like in 150 years, offering scenarios in the years 2025, 2050, and 2069, based on analyses of shopping trends and statistics and offering insight from several food experts.

“It’s expected that a quarter of all British people will be vegetarian in 2025 (up from one in eight Britons today) and half of us will identify as flexitarians (up from fifth today). Sainsbury’s alone has already seen a 24% increase in customers searching for vegan products online, and a 65% increase in sales of plant-based products year-on-year, as customers increasingly consider a vegan, vegetarian or flexitarian lifestyle.”

Plant-Based Protein on the Rise

With regards to alternative proteins, the report says that between “2016 to 2019, dozens of companies were launched, with many attracting high profile investment.” According to these findings, the “non-traditional or alternative proteins market ($4.2 billion in 2016) is expected to grow more than 25 per cent by 2025.”

Sainsbury’s cites jackfruit as an example of a plant-based protein that has seen enormous success over the past three years, and discusses their coming innovations in this field, including banana blossom, algae milk, and various mushroom derived products.

In terms of cultured meat, Sainsburys looks ahead to the year 2050 and predicts that these products be a normal part of consumer life, and introduces to the layman reader the concept of “cellular proteins, ‘meaty tissue’ cultivated independently from animals using stem cells,” stating that by “2050, there is no doubt that this will be a genuine market competitor to farmed meat.”

“Rather than getting a cut of meat at the supermarket, consumers may well be able to get their own grow it yourself ingredients for home-cultured meat, fish, eggs, milk or gelatine, at a fraction of the cost that exists today. Cellular protein could be a tool to help us meet the protein needs of a growing global population of the future.”