Americans are Not Making the Connection Between Food and Climate Change

A new report released by Earth Day Network and the Yale Program on Climate Change Communication found that  more than half of Americans willing to eat more plant-based foods, but the majority rarely discusses such issues and are demonstrably not making the connection between food and global warming. 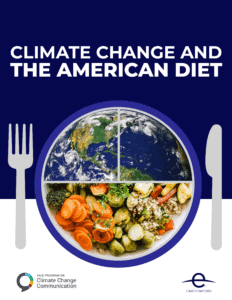 The report, titled Change and the American Diet, showed that the vast majority (94%) of US consumers are willing to eat more fruit and vegetables, with six in ten (62%) saying they are “very” willing – however the issue appears to be a lack of information about the environmental impacts of their food choices.