A study commissioned by Blue Horizon with PriceWaterhouse Coopers reveals that if 10% of the global animal market was replaced by plant-based products, by 2030 we could save CO2 emissions equivalent to 2.7 billion trees – an area of land bigger than Germany, and enough water for everyone in the state of New York for five years.

The environmental footprint of beef mince production is most striking: the impact of alternative protein is 15x lower than conventionally farmed beef.

Global meat production and consumption increase year by year. Consumption per capita is higher than ever before. For the next decade, the growth trend is expected to continue, driven by Asia, albeit at a lower rate.

The burden of meat production on the environment is massive.

The comprehensive study by Blue Horizon Corporation, with the support of PWC, shows for the first time the ecological impacts in a consistent framework across different meat categories and geographies. Also, it includes the monetisation of environmental costs to show the scale of impact and enable impacts to be compared and consolidated. The analysis illustrates that plant-based alternative protein sources have a much lower environmental impact.

Variation is considerable, depending on location and farming system. The monetisation of the related costs shows a clear picture: On average, one kilo of conventionally farmed beef generates environmental costs of no less than USD 7.26. This contrasts with costs of only USD 0.48 per kilo for its plant-based alternative. For chicken and pork, the gap is smaller but still significant:  USD 1.66 compared to USD 0.30 per kilo for poultry and USD 0.72 versus USD 0.21 for pig meat.

Global consumption of meat reached 385 million tonnes in 2018. According to the analysis, this accounts for at least 1.7 gigatonnes CO2 emissions, occupies 380 million hectares of land and requires almost 87 billion m3 of water to produce. By looking at the potential impacts of switching away from animal products to more sustainable alternatives, the study delivers impressive facts and figures.

The study finds that by 2030, with a 10% switch to plant-based alternatives, 176 million CO2 emissions could be avoided, 38 million hectares of land could be freed and 8.6 billion m3 water saved per year. In other words: If 10% of the global animal market was replaced by alternative plant-based products, by 2030 we could expect to save CO2 emissions  equivalent to 2.7 billion trees, an area of land bigger than Germany, and enough water for everyone in the state of New York for five years.

Björn Witte, CEO of Blue Horizon, comments: “This study provides detailed and robust information about the true price of consumption of animal proteins and their vegetable alternatives. This work is an important step in helping people to understand how the decisions we make about our protein consumption impact our environment. In addition, it enables investors to better assess the market opportunities in the food 4.0 sector.” 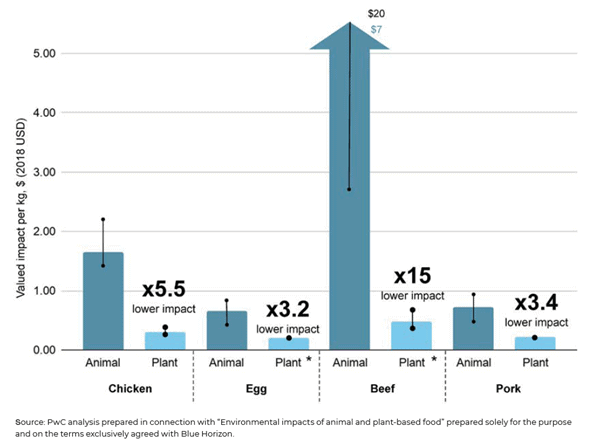 Considerable effects on land use, GHG emissions and water consumption

The quantified results of the study show that in the case of land use, plant-based alternatives are between 33% and 91% less land-intensive. Impact is most significant for beef with a potential reduction of 91%, while for pork it is lowest at 33%. In terms of location, Brazilian beef farming has by far the largest footprint, which is mostly attributable to the social costs associated with the large areas of land deforested from the Amazon for cattle farms. With regard to greenhouse gas emissions, plant-based meat is 69-92% less intensive.

Impact is most significant for beef with 92%. Pork and chicken have an equally high potential at 89% and 88% respectively. Egg comes at the end with a still high potential of 69%.  Looking at water consumption, the data show that plant-based protein similarly less resource-intensive. Results vary between 95% in the case of eggs and 53% for beef. Chicken (-82%) and pork (-84%) also show considerable potential. Chinese farming systems have the highest savings potential when shifting their population to a plant-based diet as they use much more water per kg of egg compared to Europe and the US.

Overall, the environmental footprint of plant-based alternatives has proved to be significantly lower than their animal counterparts across all products, locations, and farming systems. Although there is much less variation in the impact between plant-based alternatives compared to animal products, there are still some significant differences – ranging from $0.18 to $0.60 of impact per kg. Variation between the environmental impact of alternatives is primarily caused by the choice of protein substitute ingredient included in the recipe, which can make up by weight anything from 15 to 45% of the product.

Additionally, where oils make up a large proportion of the recipe, the environmental footprint can increase significantly. Greenhouse gas emissions per product can vary from 1.4t CO2/t (protein isolates) to 3.7t CO2/t (protein concentrates). The more highly processed an ingredient, the higher the GHG emissions produced. The lowest land use is those of mung bean protein isolates (0.05ha) while isolated proteins (0.81ha) and textured vegetable proteins (0.78ha) use most surface. The variation in water consumption is also considerable, ranging from only 61m3 for mung bean protein isolates to 309m3 for soy protein isolates.