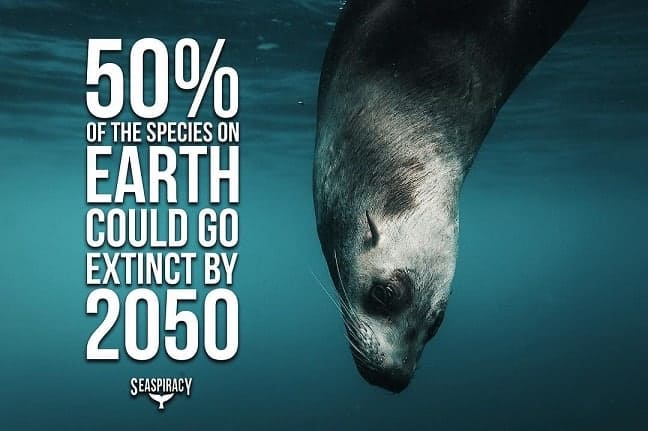 Following this week’s Netflix release of the documentary Seaspiracy, industry figures from Greenpeace, Earth Warriors, Roots & Hoots, and plant-based seafood producer Loma Linda, share opinions on the issues raised and the conclusions reached in the film. Veganism is one answer, but the planet’s overpopulation is another issue which needs to be addressed, as is education and a lack thereof, say these plantbased leaders.

A blog post from Will McCallum, head of oceans at Greenpeace UK, posits that a shift to plant-based is crucial but not enough. “Seeing the destruction of the natural world, both on land and at sea, has moved more and more people to become vegan. This is a hugely positive thing: the more people that turn to a plant-based diet, the better it will be for the planet. But although it might be part of the puzzle, veganism isn’t the silver bullet for our oceans. A campaign that focuses only on veganism ignores the billions of people that depend on the oceans for survival.”
Clearly there is a bigger picture here which demands involvement from governmental bodies and the addressing of wider issues; McCallum notes that ” Greenpeace has joined with scientists, civil society and many governments around the world to propose that at least 30% of the world’s oceans are protected by 2030 and the remainder is managed sustainably and in the public interest.”

Douglas Hines, chairman of Atlantic Natural Foods, of which vegan tuna producer Loma Linda is a subsidiary, said to vegconomist: “As leaders in all areas of the seafood industry for more than 40 years, along with veteran Mike Easterbrook, our partner in UK and EU, we have witnessed more than most in today’s seafood world.

“Watching Seaspiracy was a timely reminder not just for our world governments and legislative bodies, but for us as individuals about the impact that our day to day lives and mindless consumption of animal protein can have on our oceans and human life. Over the decades oceans have been abused by rampant fishing practices, misrepresentation of vessel catches, trash piles in the high seas, harmful bycatches, plastic pollution, human trafficking and on occasion corruption.

“Social and environmental responsibilities are ignored in favour of the gains to be made in big money catches like Pacific Blue Fin Tuna and Yellowfin in the Indian Ocean.

“Our growing population and growing demand for protein-rich food sources, is only going to swell the burgeoning strain that our oceans are under – as humans we have caused this, and it is now our responsibility to do what we can to help reverse our harmful impacts.

“Yes – this needs to be driven by world governments, who have a responsibility to drive forward international industry-wide reform and guidance to manage and protect our oceans resources, address climate impacts, stop polluting our oceans with plastic and eliminate widespread abuse of human lives.

“As consumers, making conscious choices to switch out our protein sources from animal to plant-based could help save thousands of fish a year from being killed in our oceans. As a food manufacturer and retailer, it’s our responsibility to empower consumers to make this choice, by providing a range of sustainable, nutritional, versatile, and tasty plant-based seafood products.

Zero Waste as the only solution?

Shiv Misra, Co-Founder of Zero Waste & Plastic Free delivery store Roots & Hoots says a zero waste lifestyle must be the only way forward. “The crisis of our oceans is not news to us, both as keen environmentalists and Brighton locals, though we are glad Netflix’s Seaspiracy is shining a bold light on it. It’s one of the many reasons why living a plastic-free lifestyle is crucial. The less we contribute to the endless waste and sea-life harm, the better our future is. It’s just logic.”

Keya Lamba, Co-Founder of Earth Warriors, a Havard reviewed international Early Years Environmental Curriculum provider, teaching young children about sustainability and climate change, says the company disagrees with conclusions drawn by the film.
“We’re thrilled that Netflix is making the public aware of the ocean crisis – however, we do disagree that simply not touching our oceans is the only way to stop it. Children are the future, there’s simply no denying that. If we educate children about our planet’s environmental issues in a way that engages them from a young age, we might just have a chance of changing the tide.”