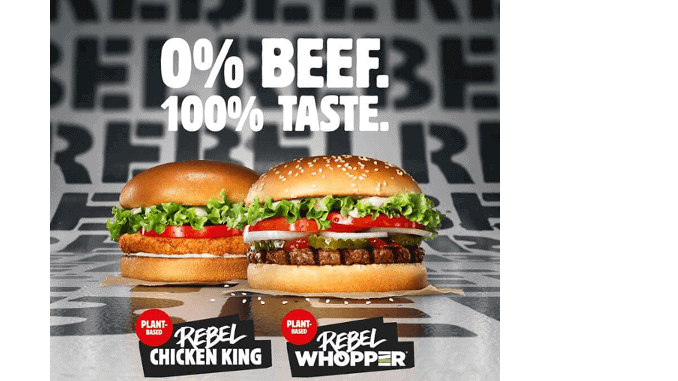 Global fast-food giant Burger King is set to bring the plant-based Whopper to Brazil. Trials are due to start next month, with a view to a nationwide release in the near future.

The animal-free burger has been named the ‘Rebel Whopper’, and reportedly boasts ‘the same taste and texture of beef’. It is to be sold in more than 50 outlets in São Paulo as of 10th September.

The launch follows a similar strategy to that of Burger King’s Impossible Whopper in the USA, where the chain initially trialled its vegan burger in St. Louis, before rolling it out nationwide just one month later. However, it came under criticism for cooking the plant-based burgers alongside meat instead of a dedicated vegetable grill.

It is an interesting move for a country which is the second largest beef producer in the world, and deforestation is rife. At present, the Amazon suffers a clearance rate equivalent to a Manhattan island every day, according to satellite monitoring.

The burger will be made by Brazil’s Marfrig Global Foods, the largest hamburger producer in the world. The meat company recently reached a deal with US agri-business ADM to produce and distribute plant-based burgers.

“Together, Marfrig and ADM will produce a 100% vegetable burger with a meat-like flavor and texture. We want to give consumers the power of choice. It’s up to them,” Eduardo Miron, chief executive of Marfrig, said in a statement.