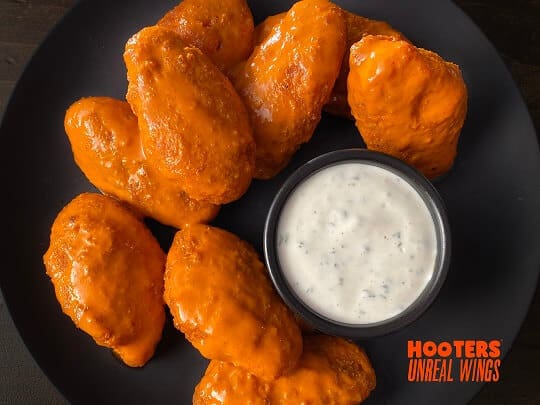 In what Hooters is calling the “first time on the casual-dining stage,” 318 of its locations across the US  are introducing a Quorn based chicken wing product called the Unreal Wings. This sees a phenomenal start to 2020 for Quorn which has already announced the KFC burger and the Gregg’s vegan steak bake as well as a vegan toastie at Costa Coffee, all in the first week of this year.

The Unreal Wings consist of Quorn’s Meatless Wings, fried and then tossed in Hooters’ sauces such as Original BBQ, Honey Thai Chili Pepper, and Classic Buffalo. Hooters states that the product is non-GMO, soy-free and sustainably-produced.

Quorn Chief Executive Kevin Brennan, previously an executive at Kellogg’s, is due to leave his post as CEO of Quorn in the near future, posting on LinkedIn recently: “Nice to be finishing up my Quorn role with a spot on Wake up to Money. Amazing final week in charge with KFC Quorn Chicken, Costa Wuirn toastier and amazing Greggs Steak bake all live. Still around for a while yet but mainly making tea for Marco the new CEO.”

For the Hooters press announcement, Brennan states: “We’ve been in the meat alternative game since the 1980s, and the new Hooters Unreal Wings taste just as good as chicken. The rise of meatless options especially at quick service and fast casual restaurants has largely centered on burgers, and we’re excited to partner with Hooters to roll out the first meatless poultry item on a national scale in the US.”

Says Carl Sweat, Chief Marketing Officer of Hooters of America. “By partnering with Quorn, we were able to create the taste, texture and crispiness of our world-famous chicken wings perfectly. Similar to our launch of smoked wings and roasted wings with half the calories of our regular wings, the Unreal wings provide our guests a healthier option without compromising on the full Hooters Wing flavor they know and love.”