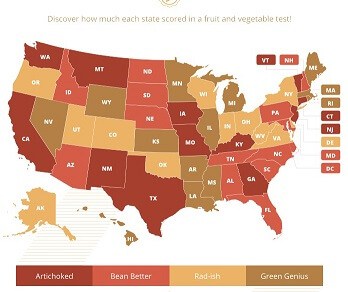 Family-owned produce grower and shipper, Hitchcock Farms, conducted a survey of 3,725 Americans to test their fruit and veg knowledge. Respondents were provided images of everyday fruit and vegetables, and were asked to identify them. The survey revealed that two-thirds of respondents didn’t know that pineapples grow from the ground, and a quarter did not know that a kumquat is even a fruit, with 12.5% believing it to be a yoga position.

The survey found that on average, just over one-third of the population (39%), could correctly identify everyday fruit and vegetables. Respondents in Wyoming scored the highest in the country with an average scored of 72.3%, while those in Kentucky ranked the lowest with an average score of just 20.9%.

The study also found that on average, Americans get only 2.3 of their five cups of fruit and veg per day, which is less than half the recommended amount. It also found that people only incorporate fresh ingredients into their diets 4.6 out of 7 days per week. The respondents admitted that only around 15% of their weekly grocery purchases consisted of fruit and vegetables, and a third said they wouldn’t eat more fruit or veggies to improve their health if they were feeling unwell.

Encouragingly the study also revealed that over half (51.4%) think there should be an increase in urban agriculture. Urban agriculture plays an important role in environmental management in built-up areas as growing cities produce more organic and water waste.

“A surprising number of people don’t have solid nutritional knowledge about fruits and vegetables. That could explain why so many don’t get their recommended daily dietary requirements,” says Karen Campbell, spokesperson for Hitchcock Farms. “When people know more about fresh produce options, they better understand the important nutritional benefits. That makes them much more likely to enjoy the variety that comes with a healthy diet.”

Hitchcock Farms have also created an interactive quiz for readers to test their own fruit and veg knowledge – they can compare their score against others across the country.