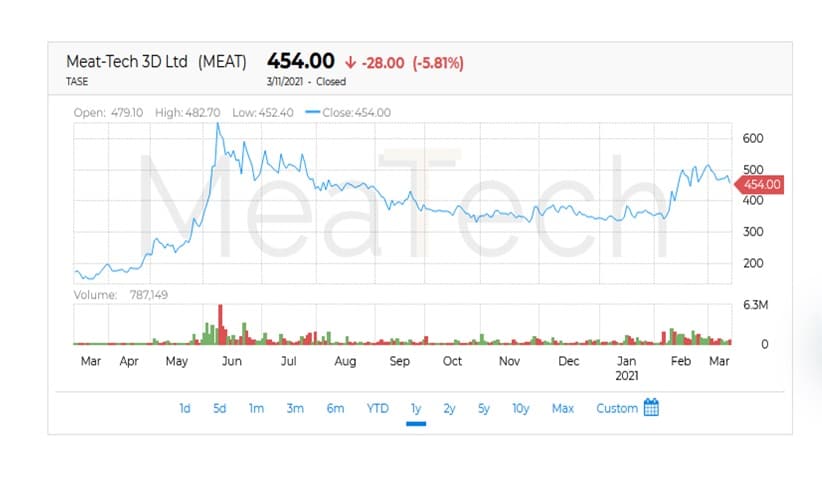 MeaTech 3D Ltd., now operating as MeaTech, a technology company focused on developing and out-licensing its proprietary 3D printing technology to manufacture proteins without the need for animal slaughter, today announced the pricing of its previously announced initial public offering of 2,427,185 American Depositary Shares (“ADSs”), each ADS representing 10 of its ordinary shares, at an initial public offering price of $10.30 per ADS, for gross proceeds of approximately $25.0 million.

As we reported in November last year, MeaTech had already been traded on the Tel Aviv Stock Exchange for a year, making it the world’s only public cultivated meat company, and announced it was filing for IPO in the US. That same week the company closed a fundraising round of $7 million.

In December, MeaTech fully acquired Peace of Meat, a Belgian producer of cultivated fats, for €15 million in a combination of cash and MeaTech common stock, stating at the time that the company estimates the first hybrid products based on the Peace of Meat cultured fat technology could be on the market as early as 2022.

MeaTech has granted the underwriter a 30-day option to purchase up to an additional 364,077 ADSs at the initial public offering price, less underwriting discounts and commissions. MeaTech ADSs have been approved for listing on the Nasdaq Capital Market and are expected to begin trading on March 12, 2021 under the ticker symbol “MITC.”

H.C. Wainwright & Co. is acting as the sole book-running manager for the offering. All ADSs to be sold in the offering are being offered by MeaTech. The offering is expected to close on or about March 16, 2021, subject to the satisfaction of customary closing conditions.

MeaTech expects to receive net proceeds from this offering of approximately $21.9 million, or approximately $25.4 million if the underwriter exercises its option to purchase additional ADSs in full, after deducting underwriting discounts and commissions and estimated offering expenses payable by MeaTech.

MeaTech intends to use the net proceeds from this offering to advance its program to develop commercial technologies to manufacture alternative foods, including potential acquisitions of other companies whose technologies are complementary or synergistic to its own, and for general corporate purposes, including working capital requirements.